“I Do Not Care If We Go Down in History as Barbarians” / „Îmi este indiferent dacă în istorie vom intra ca barbari”, directed by Radu Jude, was chosen to be Romania`s proposal for the 2019 Oscars, for the “Best Foreign Film” category. 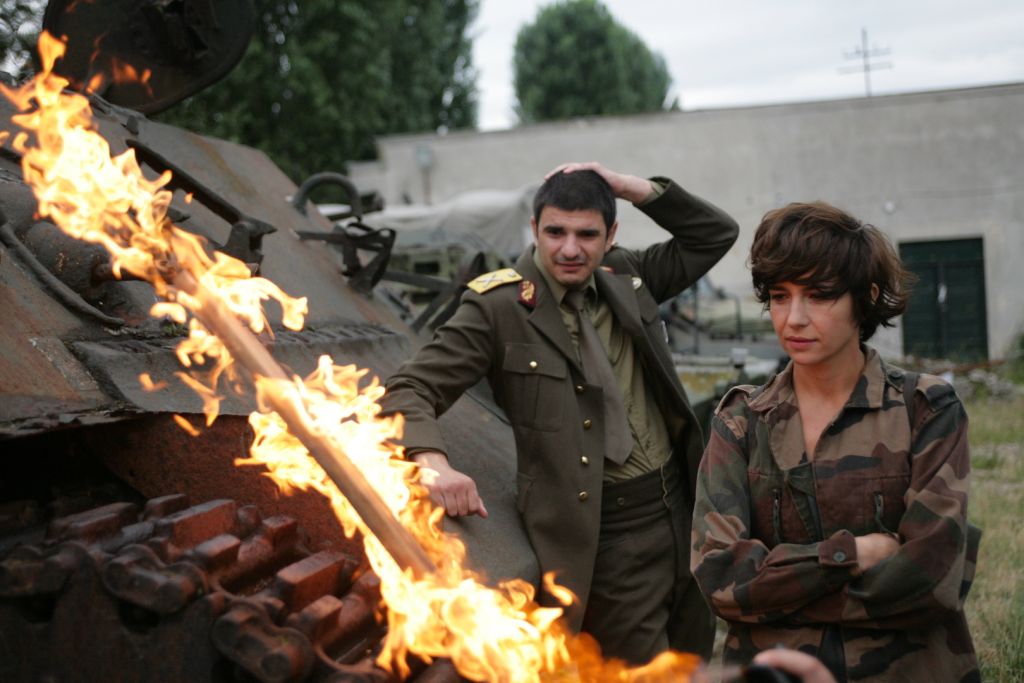 The film which has recently won the Crystal Globe of the 2018 Karlovy Vary Film Festival, received the majority of the votes in this week`s meeting of Annual Selection Committee of choosing the Romanian film which will represent Romania in the race for the Best Foreign Film at the Oscars.
The committee chosen by the Romanian Film Centre was made of Dana Duma, Magda Mihăilescu, Ionuț Mareș, Bálint Zágoni, Iulia Blaga, Andra Petrescu, Cristina Corciovescu, Marilena Ilieșiu and Claudiu Turcuș.
The eligible films were those which, according to the Oscar Awards regulations, had or will have their premiere between October 1, 2017 and September 30, 2018 and whose producers expressed their option to take part in the pre-selection.
“I Do Not Care If We Go Down in History as Barbarians” will have the Romanian premiere on September 28, but it will have a preview run of one week in the cinemas, in order to meet the rules – in order to be able to receive the nomination, the eligible films should have run for at least 7 days in a row in a cinema in the country where it was produced.
It is the second time when one film directed by Radu Jude represents Romania`s proposal for an Oscar nomination. His first film that was selected for the Oscar race was Aferim! in 2016.
Radu Jude`s 6th feature film had its world premiere on July 2, 2018, at the Karlovy Vary. The international film press called it “a smart warning sign” regarding the populism, “a provocative, sarcastic and momentous act of interrogation between the past and the present” and a “daring comedy-drama”.
The film tells the story of reconstructing a historical event (the battle of Odessa, during the Second World War) for a street performance.
The film features Ioana Iacob, Alexandru Dabija, Alex Bogdan, Ilinca Manolache, Șerban Pavlu, Ion Rizea, Claudia Ieremia and Bogdan Cotleţ. The cinematography is signed by Marius Panduru (RSC), the editing by Cătălin Cristuțiu, the sound by Jean Umanski, the mixing by Cristinel Șirli, the sound design by Dana Bunescu and the production design and costumes by Iuliana Vîlsan.
The producer is Ada Solomon and the co-producers are Jiří Konečný, Serge Lalou, Claire Dornoy, Rossitsa Valkanova, Jonas Dornbach, Janine Jackowski and Maren Ade. Holger Stern is the associate producer.
“I Do Not Care If We Go Down in History as Barbarians” is a HiFilm production, in co-production with Endorfilm (Czech Republic), Les Films D’Ici (France), Klas Film (Bulgaria), Komplizen Film (Germany), ZDF/Arte, TVR, supported by the romanian Film Centre, Czech Film Fund, L’Aide aux Cinémas du Monde, Centre National du Cinéma et de L’Image Animée – Institut Français, Bulgarian National Film Center and Eurimages, with the financial support of Dr. Oetker, Covalact, Farmacia DONA, AQUA Carpatica, Domeniile Sâmburești, EXIMTUR – Compania de călătorii, MediaCom. International Sales - Beta Cinema.
In the Romanian cinemas the film will be distributed by microFILM, from September 28, 2018.
Details: Facebook