The huge buzz surrounding Alexander Nanau, mostly due to the international success gained by his latest film collective / colectiv (which is among the critics`s bets for the 2021 Oscars nominations), together with his documentaries The World According to Ion B. / Lumea văzută de Ion B. (2009) and Toto and His Sisters / Toto și surorile lui (2014), made the president Klaus Iohannis intend to offer him the “Cultural Merit” Medal.
But Nanau refused the distinction, accusing the state of poor administration of the cultural sector during the pandemic, bringing back to the table an accusation surrounding for years the relationship between the authorities and the film industry and that is because despite the fact that the Romanian films are bragged about on any diplomatic occasion, the local film production doesn’t enjoy stability.
Here`s the letter of response Nanau sent the president , which he decided to make public.
(Update - the Ministry of Culture's reply and Nanau's reaction to it.)

Hello!
First of all, I would like to thank President Klaus Werner Iohannis and the Minister of Culture Bogdan Gheorghiu for this proposal.
Unfortunately, taking into consideration the unprecedented crisis the entire cultural sector in Romania is in, I cannot accept this distinction.
I strongly believe that during these times of crisis the Romanian state should not use the Day of Culture for symbolic ceremonies and decorations. Instead, it should announce and implement practical solutions for saving the cultural sector, which has been the strongest ambassador for many years and also an extremely important economic sector until the COVID 19 crisis. Until this moment the proposals for safeguarding the cultural industry were made only on a rhetoric level and I cannot be part of this symbolic supporting of an essential thing, the culture of this country.
I believe that decorating any artist in these times, when the cultural sector faces collapse (because of the constant failing of the Romanian state to support it during this crisis) will do the Romanian culture a long-term disservice.
As a filmmaker who draws the most international attention towards the Romanian culture and film industry now, I consider that I would be a hypocrite to accept this decoration now, when the film industry and the state structures responsible for it are almost dead. Starting with March 2020 and until today, the responsible state institutions not only didn`t address this issue, but on the contrary, they made it worse by means of lack of action and indifference.
The Romanian students who studied film or theatre, after having invested years into their professional training, have less and less perspectives of being able to do their job properly, because after this sanitary crisis would have passed, most of the film production companies will be closed, just like most of the independent theatre companies, the cinemas and the film distribution companies. The most optimistic perspective for a Romanian student is to leave the country, with the hope of finding his/her place in a country that respects its culture and which already implemented state strategies to keep it alive. Because, where it will have the chance, the cultural life will flourish like never before after this world crisis and the countries that save their cultural sector now, do it knowing that the profits the cultural activity will generate to the state budget will be more significant than the costs of an entire industry which is unemployed.
I am looking forward to any dialogue or public debate with President Klaus Iohannis, the way things happened in France, for instance, where President Emmanuel Macron had opened debates for supporting different strategies for helping culture, which were also implemented, with no delay. 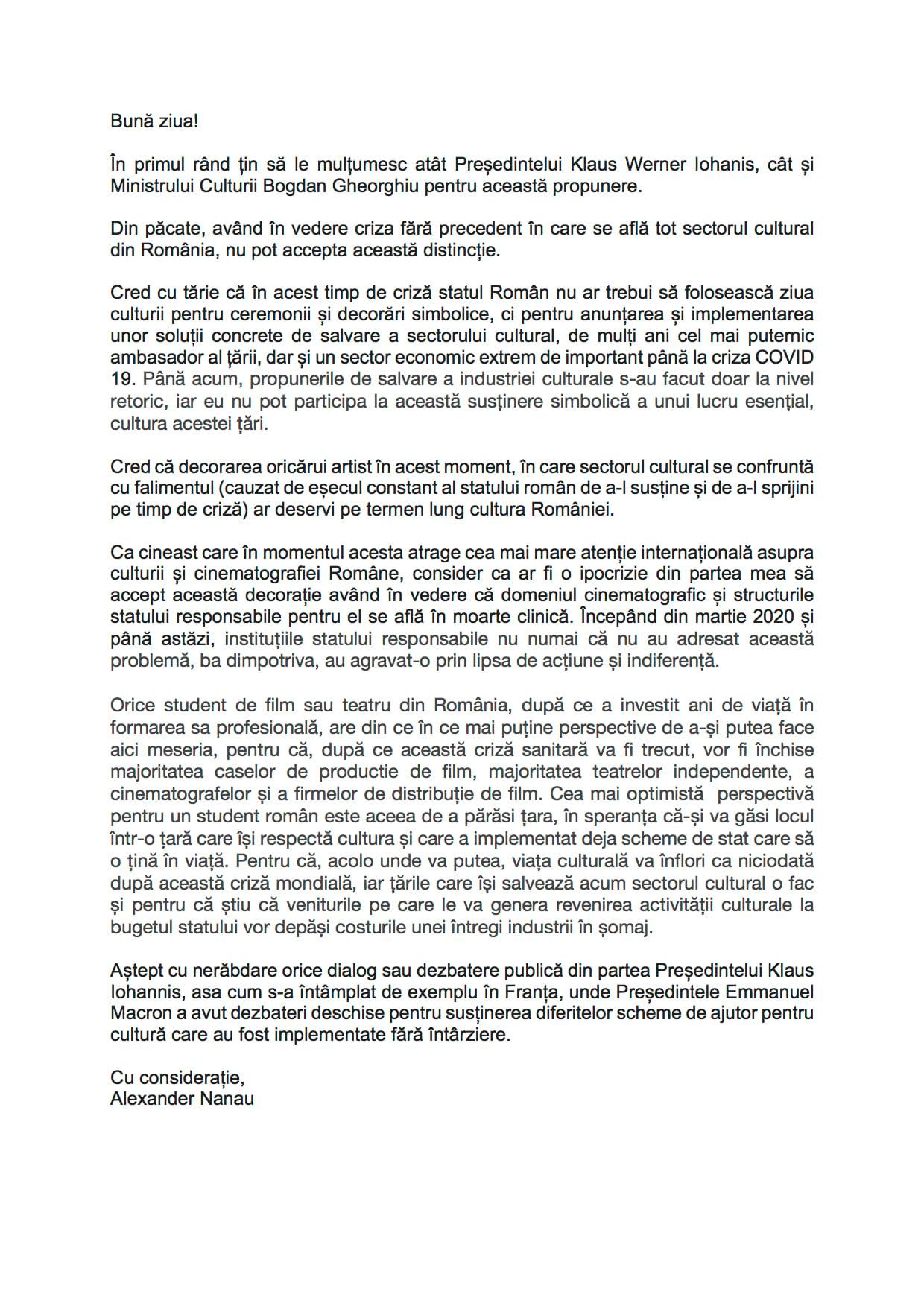