A few times, during the film, you can hear an ode “to the planet Earth, the small globe – a beautiful house with windows shining in the sun”, etc. I wonder if that is a brotherly reference to one of the musicfamous 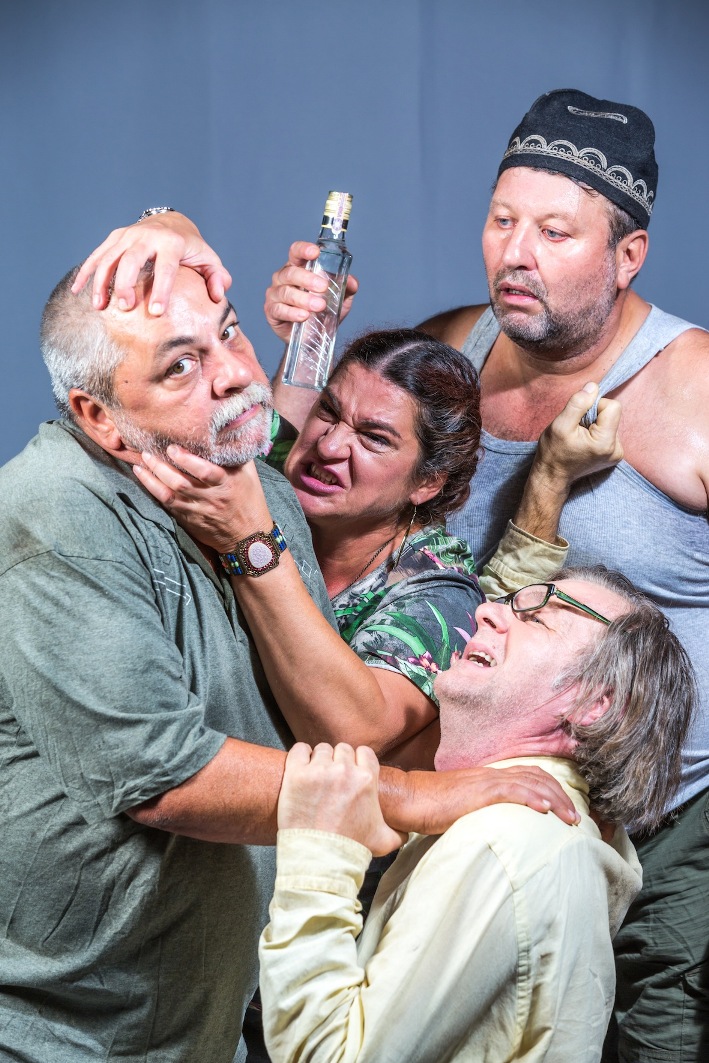 name from beyond the Prut river, Planeta Moldova, the provocative band whosehumour is that of juxtaposing words and concepts in a very intriguing way, from mocking the fundamental literature and using aggressively vulgar expressions (from“You are a relative woman / as the big Einstein would say” to “I have a big d..k”)? If such is the case, then it`s Cobileanski`s friendly gesture, as an artist that walks the same ground, but who measures it with different instruments. The filmmaker`s humour, especially in Eastern Business / Afacerea Est, seems more bitter than ever before. The absurd of the situations from his short filmsthat he won us over with, works less thanks to the combustion of a comical imaginativeness.The platitude of the reality devours everything (pay attention to the many takes that were shot on the horizontal of the frame), with its poverty, with its petty humiliating working the ropes and with all that monkey business. You might think that the author almost wonders if it`s appropriate to laugh at two
unfortunate men who are the victims of a transition to something that we don`t know what it is, the way that Moldova is today; and that is because this is what the protagonists are – a teacher who sings in the town choir, who is shy as a maiden, Marian (Constantin Pușcașu) and Petro (Ion Sapdaru), who is a small profiteer expecting to hit it big, if possible, on somebody else`s account. They belong to a world frozen in a waiting with no name, slightly nuts, where nobody pays attention to the overthrowing of a natural order: having water in the households is welcomed as a big event and the messenger is an accordion player who will celebrate the miracle with the local hymn, The Rose from Moldova. The song, which may sound simplistic in its being so predictable, places the film for good, in a space where people just want to adjust their lives a bit, but they never intend to escape. They have small aspirations, but even if they a

re so ridiculously small, they may well turn to dust, if they are not accompanied by some tricks, some double-crossing. Marian, the blonde-haired provincial intellectual who is in love with a big, strong woman, (whose gaze scares the hell out of you and who comes to meet her fiancé on a date bringing along a grotesque pot of soup), only wants to get some money for an eventual wedding. His fridge is empty, he is used to eating very little, like two loafs of bread, not six, as the waiter tried to overcharge him. He is really easy to be fooled by his neighbor Petro, in his project of buying a wagon full of horseshoes, which will be in great demand in the rough times that seem to be quite near, when the horses will be in power again, due to the local technological failure.

The two men will go through all kinds of unprofitable episodes in which sometimes we recognize the signs of the time – the avian flu, the masquerade of the poor electoral campaign with people paid with cheap vodka bottles in order to stand in the crowd and applaud the candidate. There are thieves, crooks, hookers, inventive drunkards, all over the place. You can`t really feel like laughing, not even at the predictable turning of tables (the failure of their disguising in workers of a company dealing with the prevention of the avian flu) and not even at the funny slogans: “Morality kills the health”, “The ruffianism is the sister of rheumatism”. What was supposed to be the compulsory characterial difference between the mild singer and the sixpenny businessman melts away in a compassion for the weak one, for the fate stricken, who is defeated by the woman who in the end got to be exposed as being a whore, by the business partner who runs away with the money in order to fulfill his derisory dream – to buy a crane. Igor Cobileanski chooses to put in jail exactly the most helpless hero, in other words trying to say that the naivety is paid bitterly. It`s an absurd lesson in a normal society and a regular one in a world in which the taps drop the water every now and then, but not just about anyhow, but on the sounds of The Rose from Moldova.