A time travel story opens the 19th edition of the Transilvania Film Festival on Friday, July 31, when the romantic comedy La Belle Époque, starring Daniel Auteuil and Fanny Ardant, will open the festival. Until August 9, some of the most 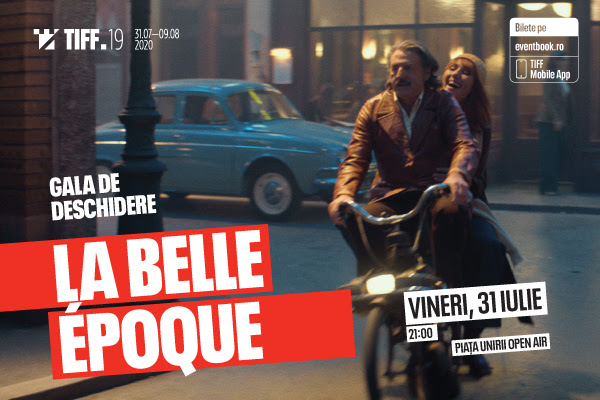 anticipated films (awarded in festivals or at the Oscars, controversial films, comedies and films based on true facts), will be screened every night, on the big screen in Piața Unirii Open Air. The festival will close under the sign of the personal history: Delete History, a comedy written by Benoît Delépine and Gustave Kervern, puts middle- aged characters face to face with technology, which seems to sabotage their lives.
The tickets for the official opening of TIFF 2020 can be bought on tiffe.eventbook.ro. The number of tickets is limited, following the rules imposed by the authorities regarding the open-air events.
A French comedy which received the Silver Bear in Berlin, will close the TIFF 2020 in Piața Unirii Open Air, on Sunday, August 9: Effacer l'historique / Delete History, Benoît Delépine and Gustave Kervern`s latest film. Last year they were the audience`s favourites with Aaltra. The victims of the internet declare war to the
technological giants, in the tasteful comedy which focuses on the disorienting effects of digitalization on the daily life of the middle-aged people. Three neighbours in a province town (each of them sabotaged by a world that takes you by surprise) are determined to free the world from under the digital dictatorship.
Long talked about, the films that will be screened in Piața Unirii in Cluj-Napoca will turn the August nights in a cinematic performance. Federico Fellini`s La Dolce Vita
under the moonlit sky of Cluj is a moment that is not to be missed. Two other films will be screened in premiere: Corpus Christi (directed by Jan Komasa), Poland`s
proposal for the Oscars and the comedy Military Wives, featuring Kristin Scott Thomas and signed by Peter Cattaneo, the director of The Full Monty. The Translators / Les traducteurs is a thriller with hackers and literature translators. It may seem a very improbable combination, but it is excitingly directed by Régis Roinsard, featuring Lambert Wilson, Olga Kurylenko and Riccardo Scamarcio.
Another film that will be screened during the TIFF 2020 is the Oscar 2020 and Palme d`Or 2019 winner, Parasite (directed by Bong Joon Ho).
The films La Belle Époque, Parasite, Les Traducteurs are distributed in Romania by Independența Film. Corpus Christi is distributed by Bad Unicorn.