The sixth Edition of Mediaş Central European Film Festival (MeCEFF) “7+1”, the only competitive thematic festival dedicated to Central-European cinema will be held this year between 1-3 September. 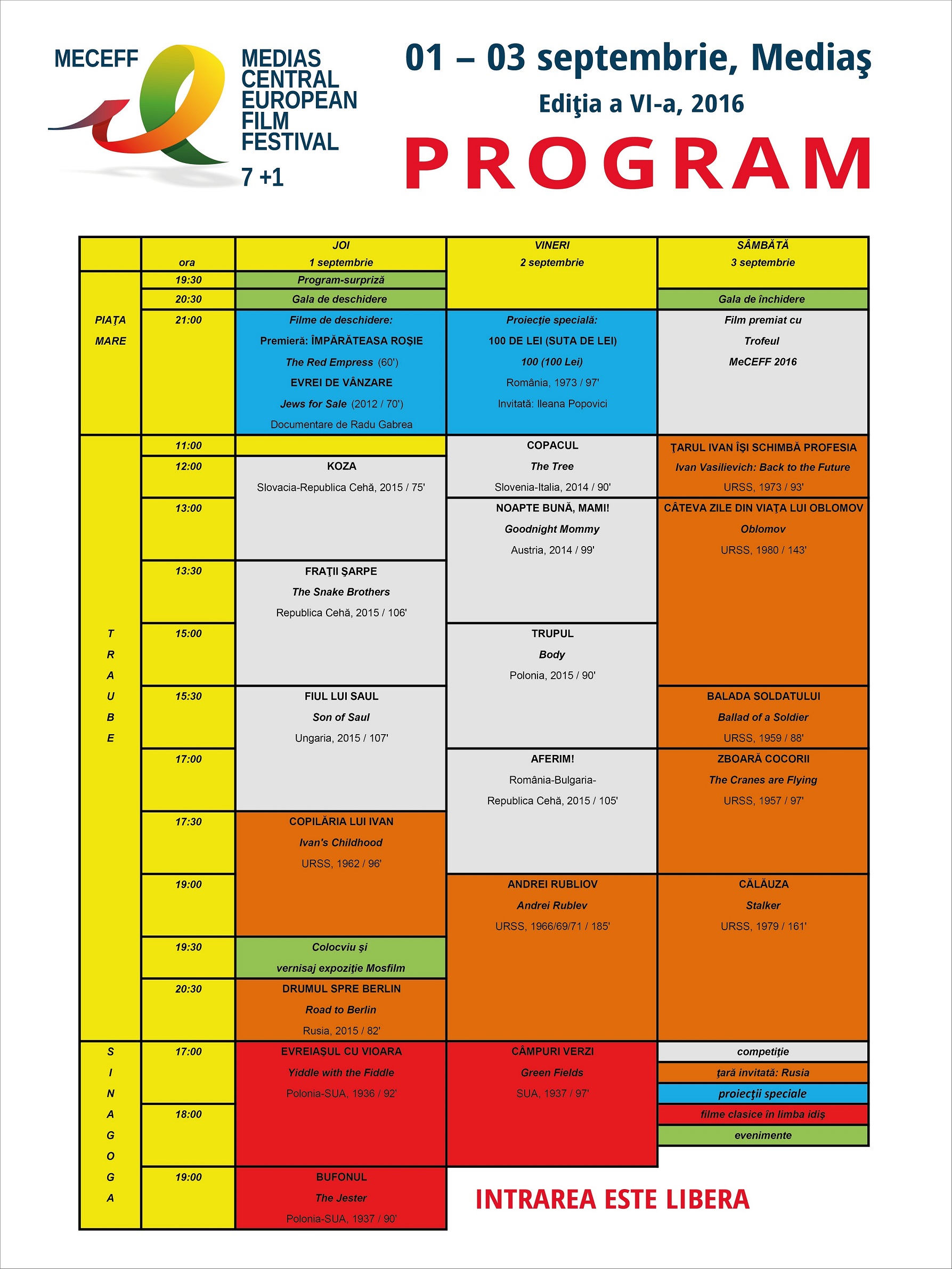 This year, with the support of the Russian Centre for Science and Culture, of Mosfilm and of the Russian Federation Embassy, the Festival will screen some of the most significant Russian films, masterpieces belonging to the universal heritage, creations of great Russian directors.
Within this section, three of the most important films by the great Russian filmmaker Andrei Tarkovski will be presented, considered one of the most influential directors of the Soviet era and of the entire cinema history – Ivan's Childhood, Andrei Rubliov and Stalker.
The programme will be completed by other five landmark films of the Russian cinema: Road to Berlin (directed by Serghei Popov), Ivan Vasilievich: Back to the Future (directed by Leonid Gaidai), Oblomov (directed by Nikita Mihalkov), The Cranes Are Flying (directed by Mihail Kalatozov) and Ballad of a Solider (directed by Grigori Ciuhrai), these films being screened, together with the titles in the competition section, at the Traube Hall.
Given that 2016 is the cinema yea in Russia, the Traube Hall will also host the colloquium  Celebration of Russian Cinema, and the public will have the opportunity to visit the exhibitions:  Mosfilm history in film posters (at Traube Hall) and The visit of Tsar Nicholas II to Romania (at the Urbanism Centre A.D.I. Regiunea Târnavelor).
During the evening, outdoors, in „Corneliu Coposu” Square (Town Hall Square), the viewers are invited to view, at the opening of the festival (1 September), the documentaries Împărăteasa roşie – Viaţa şi aventurile Anei Pauker/The Red Empress – Life and Adventures of Ana Pauker (premiere) and Evrei de vânzare/Jews for Sale, both made by the Festival's Chairman, Radu Gabrea, and – on 2 September – a special screening of the film 100 de lei (Suta de lei)/100 (100 Lei) (directed by Mircea Săucan), with actress Ileana Popovici attending, who played an important part in the film. The last night of the festival will screen the winning film.
As at the previous editions, within MeCEFF „7+1” classical restored films in the Yiddish language will be presented. The films to be made available for viewing this year at the Mediaş Synagogue are: Yiddle with His Fiddle (directed by Joseph Green, Jan Nowina-Przybylski, Poland-USA, 1936), The Jester (directed by Joseph Green, Jan Nowina-Przybylski, Poland-USA, 1937) and Green Fields (directed by Edgar G. Ulmer, Jacob Ben-Ami, USA, 1937).
Admission will be free to all Festival's screenings and events.
Details at: www.meceff.ro