One ride with death: “The Last Day” – film review


If we take his word for it, at least his word of filmmaker invited to answer a few questions, we could understand that “the cinema is useless” for Gabriel Achim. But that doesn`t stop him from “embracing it immensely”. Mutatis mutandis, in this regard, our filmmaker has famous forerunners. One of them was the fierce Madame de Staël, who considered the music “a noble futility”, but it`s exactly for that reason that “it 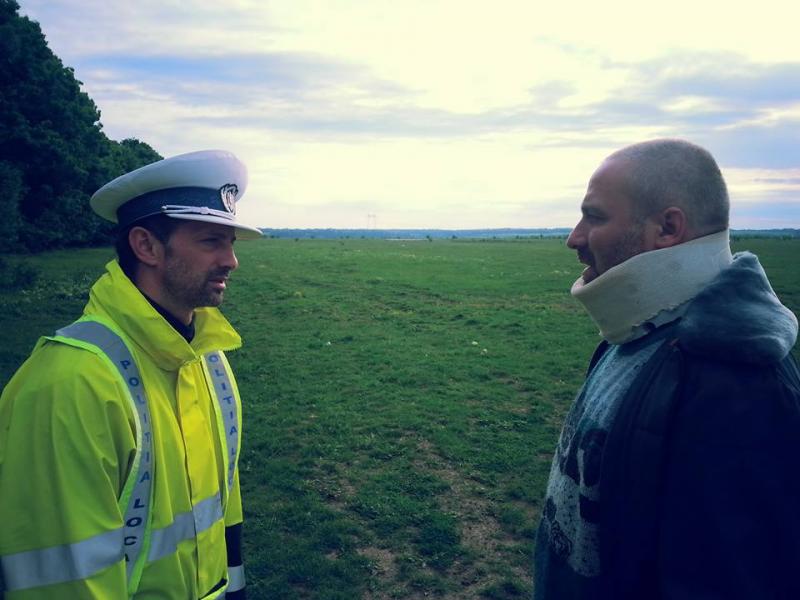 touches us so deeply”, she added. Most likely, besides the readings, there is nothing that connects Achim to the free-spirited daughter of the Enlightenment, but the desire to scandalize is as old as time. And we take it into consideration when it is not a plain caprice, when it travels the centuries surrounded by a mystery of the emotion, of the “endless embrace”. The author of the films Bric-Brac, Adalbert`s Dream / Visul lui Adalbert  and of the latest one, The Last Day / Ultima zi loves the cinema. In his own proud, sometimes aggressive way. He introduces it in the body of his films as a construction material with its secrets out in the open, or as a quote. It is not accidental that one of his favorite films is Kieslowski`s Camera Buff, the film which reveals especially the manipulating wonders of the cinema. In The Last Day (based on a screenplay written together with one of his first collaborators, Cosmin Manolache) the referential background is marked by small evocations of his habit of “recording important moments from life”,a s the protagonist confesses. Maybe the film has the feeling of those disconcerting works, which are clearer in the details, rather than in their whole. It lets itself be decomposed into fragments that want to tell us how and how much the author knows to create a certain atmosphere, to keep it that way, to suggest a confusing psychology, to bring some characters that we kind of don`t know what to make of. 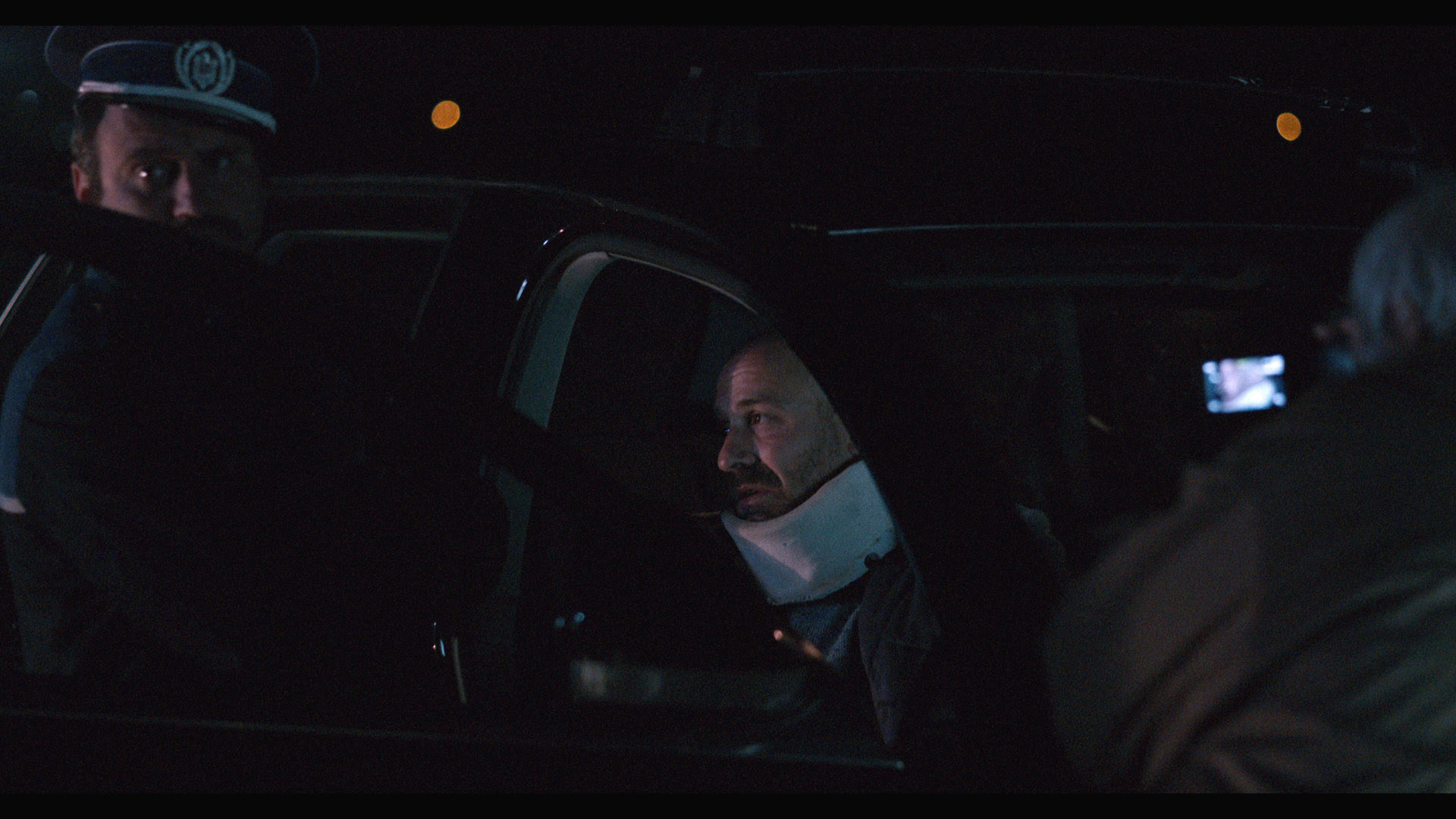 Later, we will understand that we witness a ride with death. But until then, there are some unfriendly landscapes sliding by us (night time, the feeling of cold, the rustle of the leaves in the wind), a restless music like a ferment of sounds and we look from a car to another one where we find four men (out of which one failed his wish of entering a monastery), return to their mundane affairs. Adrian, the asiring monk (Mimi Brănescu), with his neck stuck in a neck brace, barely speaks any word. Instead, the man who drives the car, a mayor and an amateur filmmaker (Doru Ana), won`t keep his mouth shut. The other car is occupied by the local policeman (Adrian Văncică) and by a guy with a doubtful role, who introduces him as the president of the League of the Christian Youth (Adrian Ciglenean). The group leader seems to be the mayor, the man who knows everything, from the recipe of a good rice dish to the quality of a forgotten film (“I know this art very well”) or the importance of one`s last resting place. We can distinguish in his tirades an ostentation of the sentimental declarations, but in an ironical manner when talking to his friend who wasn’t fortunate enough to be received in the monastery (“this is a historical event:  the first monk that is from our 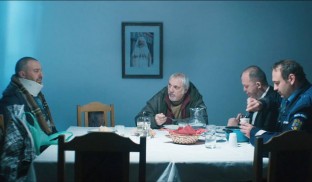 town…and he is my soul friend, maybe my best friend”) and also a cynical approach when talking to an old man they picked up along the way, who later proved to be a crook (“old man, if you don`t have a place in the cemetery, you`ve lived for nothing.”) The road is long and little by little, among the inevitable small talk, they start speaking about the big topics – religion, death, guilt. The silent companion doesn`t waste his words on trifles, he sends out a precious thought on immortality (“our bones preserve our DNA, they preserve us all, like a library”) or some metaphorical evocation of his sharing his life with the pigeon Coriolan, “his only reason to live for many years”. One of them made a stupid joke of turning the name Coriolan into the name Cornel, like Cornel Dinu, the football player. A joke for the people who can laugh at that … 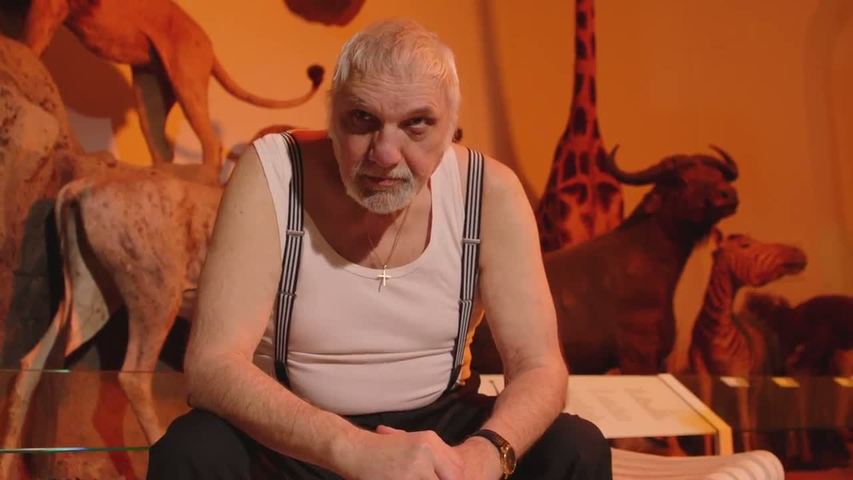 The man got in the mood for confessing: “I would like to tell you something, it`s not easy to ask for forgiveness…when you are not sure that what you did was a mistake”, etc Dramatically speaking, Adrian`s words, which were dropped on as a sort of an advance for the operation of reading the riddle of the near turn of the story.  Once arrived in the mayor`s house, we can speak about  certain chills of the promised thriller. We are on his land, where he can act at ease, with the indecency of the petty power owner, of the guy who can pretend anything he wants, in order to put on an act (with grotesque touches) of submission, humiliating and revenge. The guests have no other choice, they are prisoners, (as they probably had been some other times) of the authority. The wine is pouring, on the table there is a disgusting basin full of chunks of meat, the Chekhov`s gun is down from the wall…for the moment they fire playfully – the mayor acts up forcing the policeman swallow the piece of paper of a fake contravention; he mocks everybody…he doesn`t spare Tarkovski either, calling the aspiring monk Adrian Rubliov. In a true tour de force for the actor 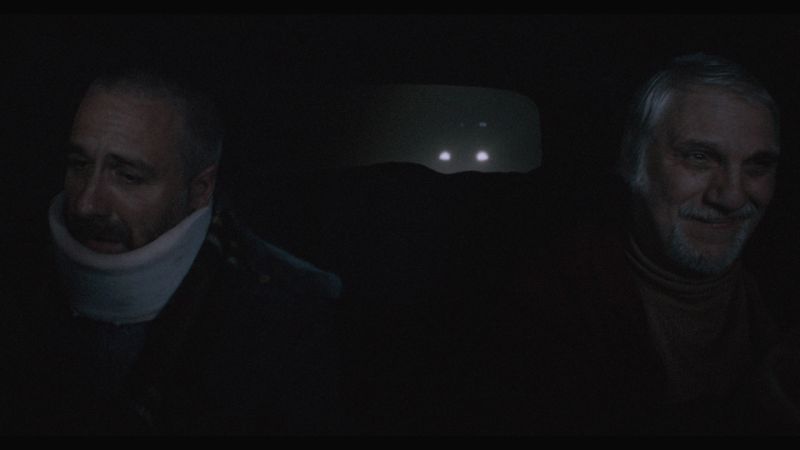 Doru Ana (playing a well-deserved big complex part), we are offered a long, derisory hermeneutics of the rabbit, which is a symbol for the Easter; but the host finds some connections with the Christmas symbols as well. It`s a strange episode, meant to be a possible distortion of the idea of sacrifice, replacing the lamb with “the little rabbit taking revenge on Jesus Christ”, or a postponing of the denouement. It`s complicated and I don`t know how necessary it was. The thriller is maintained rather by the simplicity of some scenes where you can feel the storm getting near (see the laundry hung out to dry), by the mysterious presence of the pregnant wife (Rodica Lazăr; the silent scene of her being face to face with Adrian, her former lover is quite beautiful), by the image of the head bent down of the friend who is supposed to be guilty; then condemned, like a lamb that doesn`t fight back when it is taken to be slaughtered, he is kissed hypocritically on the top of the head, letting us feel the anticipation of a late revenge. At last – the long-awaited coming out in the open air, with the gun. The instrument was expected to be used. A few gun shots are heard and we can imagine the pervert joy of Gabriel Achim who may think that we bother with counting the number of the dead bodies. If they had been more of them… As far as I`m concerned, I took pleasure in a different thing: that of seeing an excellent ending of a film which is often disappointing, with a changing target, between experiencing at the border of a film genre and the temptation of the ethics. Two almost hideous dogs engorge the meat chunks left from the feast. It is a long, almost suffocating take. A curtain that is not drawn yet over the ugliness of the life that we just witnessed.
Translation: Iulia Necoara
(15.05.2017)