Hear ye, folks!...And quite some folks they are!!: “The Return of the Magi”–film review

Looking with curious and somewhat puzzled eyes this amalgam of comedy without claiming to be subtle, but with satirical touches and poetical-fantasy drama with mystical touches, I wondered what the main idea of this story was. Reaching the minute 59, I think I discovered a key in the line of the assistant of the “magician” Mihai (Mihai Mălaimare): “You need hope. You must believe again in fairy tales, in dreams, in good magic. Healthy magic does exist. I think you need engines to start your heartsand good vibes to feed your souls.” It remains to be seen whether the film succeeds in being a combustion for our souls.
The Return of the Magi (Întoarcerea magilor) is the result of the collaboration of two artists who work in different registers: the playwright Denis Dinulescu, well-known for his being inclined towards the sharp, sometimes absurd kind of humour and the filmmaker Ioan Cărmăzan, who is more of a dreamer hidden in a tough case, interested in the petty, marginal world, where he feels he can find a more genuine disposition towards the unseen world. 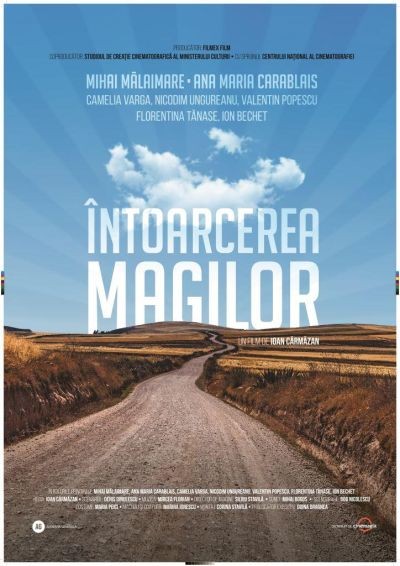 The story is set in the village of Roua (=dew). It`s a poetic, meaningful name, because as the magician Mihai explains, “the dew is on 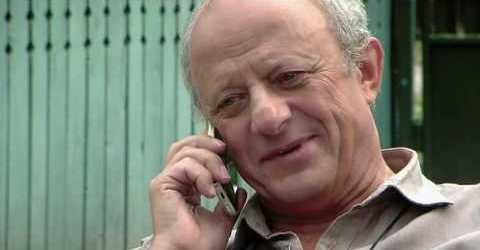 the flowers, on the grass, on the souls. The dew is God`s tear of joy.” Beyond its peaceful, bucolic aspect, with poultries flying around the lanes, with a few slopes and with people who stop by and have a drink on the porch of the drinking house, Roua is not at all  a bucolic, blessed place. And that is because the loquacious mayor (Nicodim Ungureanu) makes a fuss, but more over not important things, the priest (Valentin Popescu) is more of a caricature with a fake beard and a fat lover that he takes with him in rides in a motorbike with sidecar; the gossip is always welcome. The only truly radiant person is the nurse Paula, who lives her drama with decency: one year ago, her husband and her boy who had gone out fishing, ended up being the victims of a car accidents which unfolded right in front of her eyes, because it was live on TV. She now lives with her sister, Luna and with on orphan girl that she is about to adopt. In the context of her usual life which is looked upon by Cărmăzan sometimes with an amused eye and sometimes with a pretty mean but permissive one, strange things start to happen. Up the hill Paula encounters a huge turtle, which is totally inadequate to that place. Lately a strange young man has found shelter in the caves near the village; the villagers call him The Derived One, when his name is actually Happiness (!). He went to the Mayor House to request an address where he could receive the letters he received from his sister who lived in Chicago. An elderly woman who was born here and who is a great lady somewhere in Europe walks around in a blue dress and a bit drunk, until she lands on the sofa (from the cave??) of The Derived One; they start having an affair. All of these things stir the village voice, but not the poultry which are not bothered in the street, a kind of leit-motive of the film. And at some point, as Topârceanu would put it, “a butterfly flies over the entire agitation”. Actually, they are two: Mihai and his assistant. The magicians come to the village, but they won`t stay long because “you only get to feel the magic once. We leave and never come back”. The two people who at the beginning of the film seemed to be some street clowns who entertained the passers-by with pantomime moments, take off their costumes and wipe off their makeup and pretend they have supernatural powers. They even pretend they can bring back to life two people from the village, on the condition that the villagers decide who they choose. “They should bring Eminescu back to life. So that the Russians stop saying he is theirs”. (how about that?!...)
Towards the end, The Return of the Magi turns towards that ambiguity that is so very dear to Cărmăzan. The final shot of the film brings the head of an ostrich on the screen, which looks at us, just like saying “You`re free to believe whatever you want”.