Submissions to the Gopo Awards 2020, for documentary and short film


The Gopo Awards Gala, the most important event which rewards and celebrates the annual accomplishments of the Romanian film industry, announces the call for entry for the documentary and short film categories of the edition number 14, which will take place in March. The submission deadline is January 13, 2020. The nominations will be announced in February.
Over 25 feature films and documentaries, released in cinema during this year, are eligible to be judged and nominated for the Gopo Awards 2020. The Romanian films produced in our country or made in co-production, but with majority 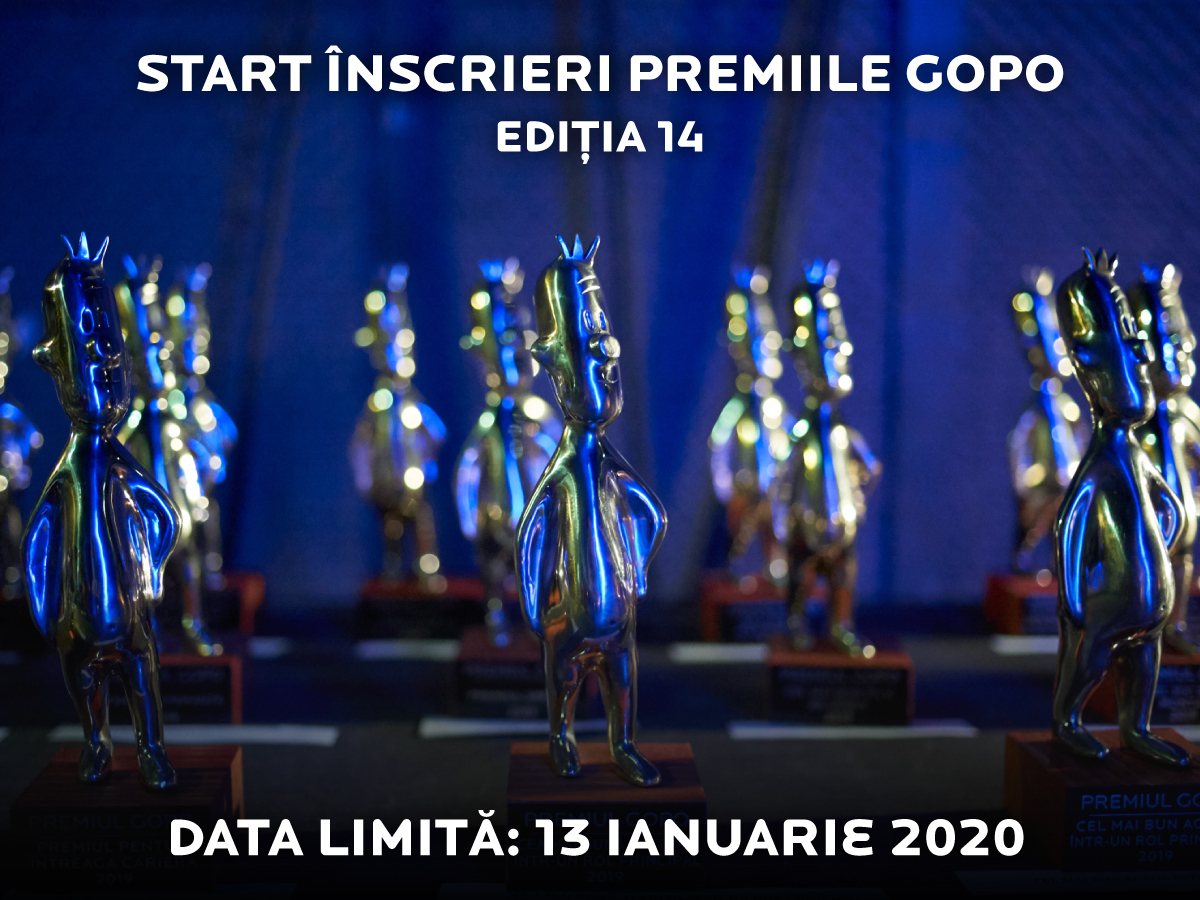 Romanian participation which had the Romanian premiere from January 1 to December 31 and which had at least one week of scheduling in cinemas, with ticket-based access are the productions that the jury will take into consideration for nomination.
Among the eligible productions for the Best Romanian Film title there are films that were awarded and appreciated in international film festivals, such as La Gomera, which had the international premiere at Cannes 2019 and it is Romania`s proposal for the Oscars 2020, Monsters / Monștri., which received the Audience Award at Berlinale and the Romanian Film Days Award for best debut at TIFF, Touch Me Not – the Golden Bear in Berlin 2018. Other films that audiences loved are Marie, Queen of Romania / Maria, Regina României, Oh, Ramona or Parking, but also feature films that speak about our past, such as Arrest and Between Pain and Amen / Între chin și amin or  documentaries asuch as Timebox and The Being Romanian: A Family Journal /  Jurnalul familiei -Escu.
For the Best Documentary category (only in the case of the films which were not screened in cinema more than a week) it is necessary to submit the Romanian films which had the premiere in the course of the year 2019 and which were not released in cinemas, but they were aired on TV or in the festivals circuit) national or international). The TV reports are not eligible for the documentary category.
For the Best Short Film category, the Romanian productions that are eligible are the ones that were presented in premiere on the big screens, on TV or at least in one competitive festival (national or international) during 2019. In order for them to be taken into consideration by the jury which will decide the nominations, it is compulsory for the producers to submit them.
The submissions take place from December 16 2019 to January 13 2010. The Romanian film producers and filmmakers are invited to fill in the technical form available on the website.

The Rules of the Gopo Awards are available on the official site.
The nominations for all the categories will be settled in February by a preselection jury made by professionals of the film industry. After announcing the nominations, more than 600 active professionals from all the fields of the film industry will be invited to vote for the winners of the Gopo trophies 2020, by means of a voting mechanism ensured by the prestigious audit and consulting company PwC Romania that the Gopo Awards organizers started a partnership with ever since 2011.
The Gopo Awards Gala 2020 is organized by the Romanian Film Promotion Association together with the Urban Film and Culture Association, with the support of the Romanian Film Centre, the National Theatre in Bucharest and Babel Communications.
Details: Premiile Gopo // Premiile Gopo FB
(17.12.2019)