The 10th edition of the “Film 4 Fun” Festival will take place from August 2 to 4, at the Casino Sinaia, Carmen Sylva Cultural Centre and “Castelul Știrbei” Museum. This anniversary edition continues its tradition and brings some surprises and as each time, it promises to meet the motto: “In a world full of conflicts, we chose to have fun!” During the three days of the festival, the viewers will have the chance to watch Romanian comedies, pre-debut short films of the accomplished film directors and the debut of a young female director. 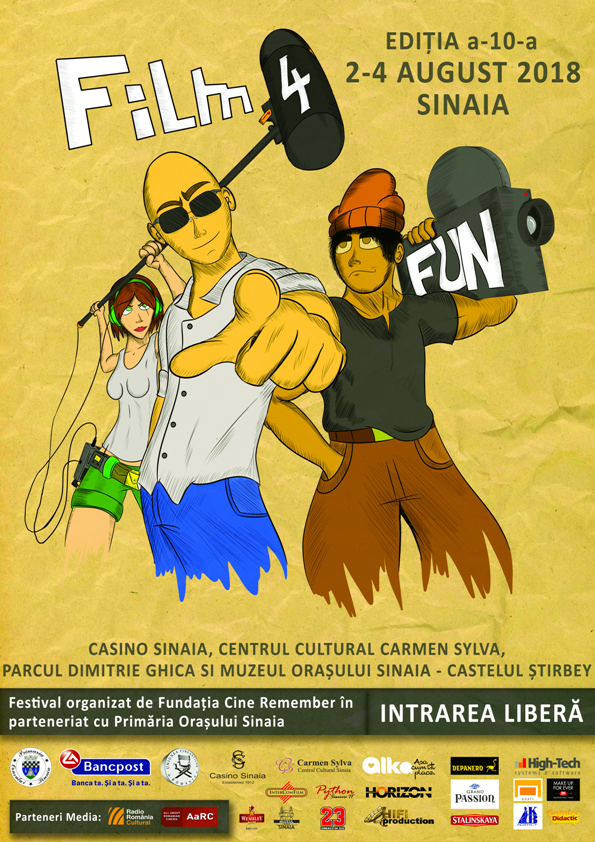 This year the festival will also have an ads section – “Ads for Fun”, presented by Bogdan Naumovici. Another premiere of this edition will be represented by the famous actor Gheorghe Visu`s drawings exhibition.
Another surprise is the theatre comedy performance “Husbands for Sale”.
The festival will end with a concert held by the band Les Elephants Bizarres. The Ghica Park is the place where many cultural activities will take place: a contest of film culture, a puppet show for children, a special effects make-up session and a light show.
In order to celebrate its 10th anniversary, “Film 4 Fun” will welcome as its special guests some dear friends of the festival who have been close to the festival during all these years; among them we can mention some personalities of the world of film and theatre: Florin Zamfirescu, Gheorghe Visu, Radu Gabriel, Corina Dănilă, Marius Galea, Maria Radu, Irina Margareta Nistor, Ana Odagiu, Manuela Hărăbor, Lamia Beligan, Bogdan Naumovici.
The Film 4 Fun festival is organized by the Cine Remember Foundation, in partnership with the Sinaia City hall. “Having reached its 10th anniversary in the year of the Centenary, the Film4Fun Comedy Film festival succeeds to bring us closer to our film heroes. It is a festival that we support from all our heart and it adds to the list of events meant to show us the beautiful things in our lives, just like Sinaia Forever does as well”, Vlad Oprea, the mayor of Sinaia said.
The entry is free for all the events of the festival.
Details: facebook