About “Roads and crossroads in the Balkan film” with Lydia Papadimitriou


Lydia Papadimitriou is a university professor at the Liverpool John Moores University, where she has been teaching Film History since 1997. She wrote books dedicated to the cinema from her native country, Greece – “Greek Cinema: texts, Histories, Identities” and “The Greek Film Musical. A Critical and Cultural History”. She writes reviews for “Sight and Sound” and “Senses of Cinema”. She has taken part in all the symposia dedicated to the Balkan cinema, organized in Cetate, during the Divan Film Festival. This year she chaired the symposium dedicated to the Roads and Crossroads in the Balkan Film.
So, Lydia Papadimitriou, obviously you love this place very much, Cetate. It`s a meeting point for us and the films from the Balkan space. You know this cinema, I`m quite sure, I noticed this. And I should like to ask you if you had the opportunity, as a teacher, as someone who has been dealing with cinema for pretty many years, I suppose, so if you had the opportunity to watch, to follow a little the Romanian cinema, this movement in the last few years, more precisely after the Revolution.
I do agree with you, I really like this place, it has a beautiful energy, the Danube, the sunset, the food, the company and most important, of course the people that also know about Balkan cinema, which means also you. Every time I come here I learn more and find out more films, so this is excellent. I am very interested in Balkan cinema because being Greek, I never had the chance as a child, or a young person, to discover more than very very few films from the other side of the Iron Curtain. So, once things started changing and opening up, I was always curious. But then again things moved on and particularly for the Romanian cinema, it was only when some films started to be noticed in the west, like for instance Cristian Mungiu`s “4 months, 3 weeks and 2 days” I started to pay more attention. Then, I have been watching more films, reading more stuff and even I am teaching as much as I can my students in England about things they have absolutely no idea about. In Greece you have the geographical proximity; even if you don`t know as much, you have ideas, views, impressions, some contact with it; and that happens much more nowadays that the borders are opened and all that. But people in England “imagine” the Balkans. For them it`s some kind of a space out there, an inferior one…and the only thing they can imagine about it is “war”, unfortunately. Which is actually really bad news – war and messiness. And I like to use cinema to show something more than that, to break up this kind of stereotypes, there have been wars in the history of the Balkans, there`s no question and many films have dealt with that. But there`s other stuff too. And I want to break the stereotypes. Romania for them is just Dracula, Transylvania. They don`t actually know much. And there`s so much more to it. It`s an opportunity for me to get to familiarize themselves with the cultural space, but also with the cinema which is actually very very interesting in my view – the Romanian cinema and some other examples of course. But to be honest, I think Romanian cinema from the Balkans, is much more easily identifiable because of that movement of the new Romanian cinema that has gained attention, and creates films that have quite consistent characteristics, the same of course, coming from the minimalist realism.

Now things are different. There are great differences between the newcomers.
Of course. And this a good thing. Because we don`t want things to be stuck in one way. I find everything very exciting, actually.

I suppose you have seen “Aferim!” in Berlin, for instance. It`s quite different.
Absolutely. You are very right. It is a very different film in many ways. Much “juicier”. It follows two guys who have these encounters…

So you prefer the minimalism…
I like the minimalism when it works. I really enjoyed “Aferim!”, because I like this mixture of humour, but also it dealt with a very strong topic – as many of the films, not all of them, because some of them are about the everydayness. “Aferim!” is about the gypsy slavery which is a very strong topic, but also about this space here  in Valachia where we are now as well. In this period when the political situation was extremely different, different ethnicities lived together, I don`t remember exactly the political aspects, but I know there were boyards and... As a film, it was a very interesting historical one, I found the way it reconstructed the past was very nicely suggested. But at the same time, it`s a critic through all that, if you want.

Of course. It`s a tragic history.
Absolutely. But as I said it is also a very funny film.

Even for us it was very shocking, in a way, because Radu Jude`s previous films had completely different topics.
I don`t think I`ve seen any of his previous films, actually. Because unfortunately I have a bit of a fragmented perspective, I see some films but I don`t always have the opportunity to see all of each director`s films. In terms of Mungiu`s films, for example, I`ve seen “Beyond the hills” as well, which I thought was amazing. I really liked it.

It got a prize for scenario and female interpretation at Cannes.
I thought it was a very powerful film as well. I didn`t have any expectations, really before I entered the cinema. I saw it on a big screen, which was good, at the festival in Thessaloniki; it was packed; a film about life in monastery but then it becomes so…

You have to see it!
I understand it`s a film that`s doing something different.

Quite different. I think this is interesting in our cinema. All the known, the  well-known Romanian filmmakers have done quite different films in the last years. Other topics, other styles. For instance Corneliu Porumboiu now is dealing with a very conceptual kind of cinema, quite different from his debut.
I find it`s a good thing. I saw “Police, adjective” that you have written about, which I think it`s great, actually.

Of course.
I do show them to my students as well because I like to show them real minimalism, but they do find it hard going because so little happens.

Nothing happens, actually. Or whatever happens is beyond. And all the discussions about the language. And the analysis on the text…
I know, I know. And I think it`s very clever. I do like it a lot. But yes, it`s clearly a film that avoids the drama; the drama happens elsewhere.

It`s a good observation. So, I think you`ll have many opportunities to see some films, maybe we shall try, we are your friends from Cetate, we should send you some DVDs to show to your students and then to discuss about these films.
To be honest, this is part of the reason why I am restricted. I can basically use DVDs which circulates in England. And there are some. But really, unless I get them through friends, I can only see the main films that have travelled. So, it`s either I watch them in festivals or when they are out, on DVD.

This is a strange thing that happens in the cinema marketing. The films are very well known among us, the professionals get a lot of prizes, but it`s pretty difficult to get to the audience. But look what happens even with the cinema from Balkans; for us, we are all neighbours and we don`t know…here I have to confess that for instance I haven`t seen many of the films our colleagues were talking yesterday about…
Even you haven`t seen them…and you have seen so many films!

Yes…fortunately, from time to time, I get to see them in Cannes, in Venice, in Valladolid, Thessaloniki; it happens to see one, two, three, but it`s impossible to see all the films. And I remember when I was young, at the beginning of my profession, I knew about every film of this space. For instance, yesterday I was very touched when our colleague mentioned “The peach thief” directed by Vulo Radev. Now, unfortunately it`s Kusturica, Goran Paskalevici, I know pretty well because they are well known in the festivals. Tanovici from Bosnia.
Danis Tanovic, yes, who got a prize in Berlin. But I know about them because they won prizes.
This is what I`m saying. Actually this system of award giving is very important, but at the same time it means that really only just a few films that manage to reach that point of success can actually be known outside, even for those who are particularly interested in a particular cinema. For the broad audiences, or not necessarily broad like me, who I`m not researching specifically that area, but I`m interested in it, I find it difficult to find information.

This is why I think Mircea Dinescu`s idea to establish here such encounters between us coming from different countries, but neighbours, is brilliant.
Absolutely and this is exactly why I am a regular here, that is why I want to be a regular and also would like to help to take it even further. What I would really like is regarding the publications. Because, of course, not everybody can come here. But because we do publications and as you know this year we launched the third edition of the Symposium which this last year was on the topic of „Heroes and anti-heroes in the Balkans”. It would be great if these publications circulated on a broader level, if people who are interested could actually have a place to buy them, or get them on the internet, so that it doesn`t actually end with us. And this is something I will try to do, to try to improve the circulation, to open things up, to get publishers, perhaps.

Little by little we`ll improve.
I think you`re absolutely right. I think that if we can keep up the focus, the intensity, the will to open up communication and create some kind of a Balkan identity for outside as well, then things will move on. I`m optimistic. I think it`s  exciting. I definitely think there is something in common amongst people from the Balkans, despite the different languages. Because they are very different, indeed.

Yesterday I was very happy when somebody  mentioned something in French. I like to speak French, but English is good as well.
Thank you very much, Lydia and I am sure I will meet you again!
Thank you very very much, Magda! 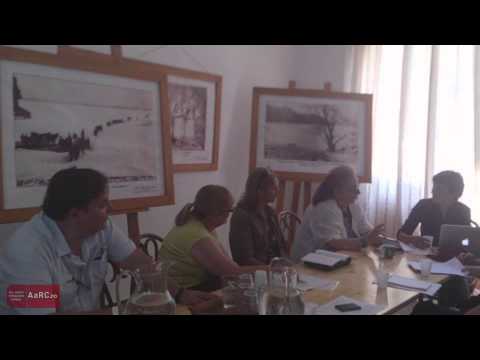