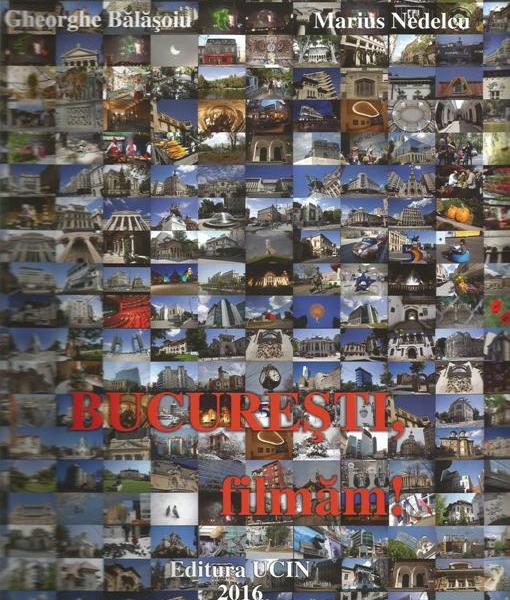 The feeling of joyful game with which we, the filmmakers, use to treat things and people, as if the whole world would be just a studio at our disposal, goes beyond dream: stunning beauty, strangeness, are waiting at the corner of the street!
While writing my PhD thesis "A Subjective History of the Romanian Film Art Direction" (coordinator Manuela Cernat -2004), I've quoted the point of view of a great architect and film scenographer, I.M. Pei: "Filmmakers are thieves. They steal from left and right flashes of the real, moments that otherwise would irreparably get lost… Sure enough, they premeditate their work but at the same time they make up reality and use their harvest ... "
When I was working as Art Director for important Romanian and foreign directors, I was often struck by their delight in saying: "Romania is a huge movie set!" Indeed its architectural, geographic and visual diversity, provides infinite opportunities for the movie set.
On the other hand, whenever I feel like running out of the daily life, I grab both my photo and video cameras and start strolling around Bucharest, counting on my eye and on chance... I invent small plots, look for unusual angles, play with connections, zooming, details.
This habit, along with my film art director experience, pushed me to publish in 2008 the huge album "Bucharest — Movie Set" (UNATC Press), meant to be a "tool" for the movie industry. Secretely I was hopping it would be a hit. What happened went beyond any expectations. The book was sold out the very first day, getting me quite a lot of enemies... Even if lately I discreetly withdrew from the film sets, splitting my energy and my life (faithful! to my Gemini sign...) between architecture and teaching film art direction at UNATC “I.L. Caragiale”. I have not broken my ties with film.
“I designed the wall - says Frank Lloyd Wright, my favorite architect - in the spirit of letting the outside world get into the house, entrusting it the function of the SCREEN, of a way to open the spot”.
This structural decorativism (synthesis of form„ technique, ornament) places the strongly articulated architecture to the heart of the scenographic universe.
After the 2008 book was sold out, we felt it was our duty to go on. With growing enthusiasm, we did collect a new enormous amount of data (approximately 7,000 slides). The surprises, the novelties provided by the city we live in, seemed endless. Together with my colleague and contributor, Marius Nedelcu, the main "artisan" in charge with the photographic technique, we strived for almost two (!) years to select the most representative locations. Yet I bet we will make some last minute changes even at the printing house...
The pictures unfold according to the cinematic potential of the buildings and landscapes framed in a static way by the photographic camera, waiting for the moment when the magic command "Action!" will integrate them into the dynamic flow of moving images.
The rich architectural diversity expressing various historical ages, including the Communist one (!), the generous landscapes with exuberant parks and gardens, rank among the reasons for which Bucharest - and thus Romania —may be increasingly attractive for international film projects. Those with experience in the field know that often the solutions provided on the spot by a location encountered during the pre-shooting period, prove infinitely more seducing than the initial decor sketches, stimulating the imagination of both the director and the D.O.P., imposing new, unexpected solutions.
If we intend to enter the network of "movie set" countries, we have to be able to present to foreign producers a well-structured and coherent offer.
As I wrote in the Foreword of the first volume: "The concentration of all locations in a relatively small area reduces considerably the travel costs. Mainly for the big crews, such buget savings are considerable. It is an asset, an unique advantage, that up to now Romania has modestly promoted exploited. The present catalogue (volume) intends to be a useful tool, an appealing offer for the international film production. " The Historical criteria — belle epoque, interwar years, futuristic decoration, contemporary, ultramodern - and the topographical ones alternate with a choice of casual environements. Above all we emphasised the cinematic potential of each location since an environement rich in architectural and historical values may not match film production purposes. The world of fiction has its own rules, totally appart from the ones of reality.
When shooting on location it is impossible to dissociate the space from the people living there. They are the ones who animate it, provide life and authenticity. That's why small atmosphere touches and details are essential in proving the gift and skill of the art director, the fine quality of his work.
"Bucharest, Action!" is a sequel to our previous book. Born out of the passion and strive of its authors, it is accompanied by the point of view of three major personalities of the contemporary Romanian culture: Răzvan Theodorescu, Manuela Cernat and Laurenţiu Damian.