Cineclub Queer organizes – in partnership with the Bucharest Goethe-Institut – the first screening in Romania of one of the first LGBT film, Different from the Others / Anders als die Andern (directed by Richard Oswald, 1919). Starring Conrad Veidt (who one year later would become famous for his part in The Cabinet of Dr.Caligari / Das Cabinet des Dr.Caligari), the film has a polemical intention, versus the controversial Article 175 of the German 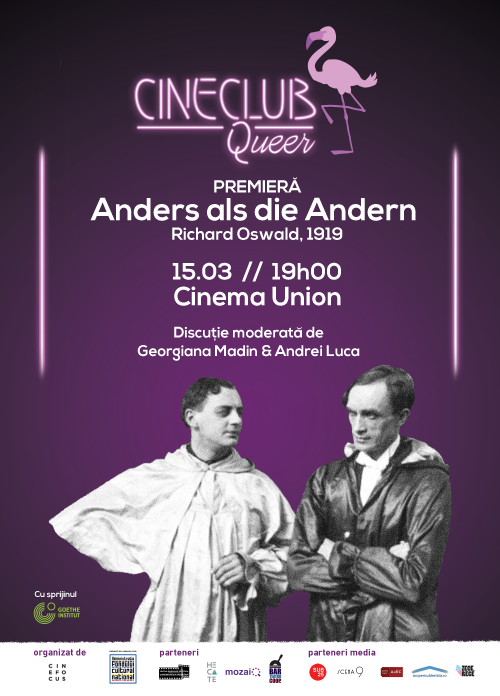 Penal Code, which incriminated homosexuality.
Beyond the story itself, which follows the attempt of a violinist to save his relationship and his career from the consequences of a blackmail regarding his own sexuality, Anders als die Andern is still a relevant film because the numerous attempts of the German authorities to ban it, to censor it or to destroy it completely open a larger debate about the evolution of the attitudes towards homosexuality in the 20th century.
The screening is scheduled on Thursday, March, 15, 2018, starting with 19:00, at the Union Hall of the Romanian Cinemateque and it will be followed by a q&a with the film critics Georgiana Madin and Andrei Luca.
Cineclub Queer is a film project that means organizing two film events per month, representing the screening of queer films. By this initiative, Cineclub Queer intends to bring to the attention of the audience a series of classical LGBTQ+ films from the world cinema (produced until 1990).
The visual of the event is made by Radu Pop.
The entry ticket is 3 lei.
It is a cultural project co-financed by the Administration of the National Cultural Fund (AFCN). The project does not necessarily represent the position of the AFCN. AFCN is not responsible for the content of the project or for the way the results of the project may be used. These represent entirely the responsibility of the beneficiary of the funding.
Details: Facebook // Blog