The atmosphere of the event from Onești didn`t change much since last year, even if in the meantime another mayor was chosen and the screening place moved to the town park. The Romanian Film Caravan, organized by theCineCultura Association and MDV Audio-Video, brought the town an award for its cultural activity and in consequence, the new mayor, engineer Nicolae Gnatiuc, got himself involved in organizing it.
His idea of moving the screenings in the park, in front of the ”Nadia Comaneci” Sports Center proved to be very good, since many local people came to see the Romanian films and the filmmakers that were invited. You could see posters with the program of the event everywhere and the press conferencetook place at the Mayor House was covered by the local media.
The fourth edition of the Romanian Film Caravan in Onești was organized with the support of the Romanian Filmmakers Union (UCIN) and of Dacin Sara. The film director Laurențiu Damian, the president of UCIN and the film director Șerban Marinescu, the president of Dacin Sara, were present at the screenings and introduced the films.
The organizers Roxana Busu și Mihai Orășanu brought to the public some classic Romanian films, but also recent productions, such asBy the Rails,directed by Cătălin Mitulescu, who came to the screening accompanied by the actress Ada Condeescu. At the screening of the feature film Carmen, the director Doru Nițescu came together with the actress Rodica Lazăr, who was born inOnești. The special guests of the event were the actors Dorel Vișan and Bogdan Stanoevici.
Details: caravanafilm.ro / facebook
Cinematography: Valeriu Ciubotaru 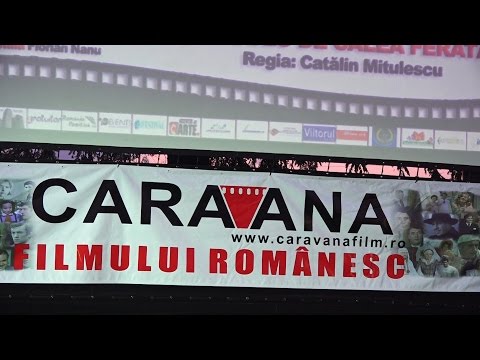