We get to know almost nothing about the deceased person, about the man for whom the 40 days memorial service is about to take place (at one point we will find out the size of the dead man`s trousers.) Was he a good man? Or not? The memorial services are made for all kinds of people, no matter how they were. But it`s not the memorial which is important in Cristi Puiu`s film, but the memories; in other words, not what once existed, a life, but the existence of those who believe that death is something that happens only to other people, that their end is far away.
It is so very far away that they afford

wasting the leisure of a family reunion – most of the people came there at least out of a minimum respect towards the religious habits, if not necessarily out of feeling the sacredness of the moment. And they afford blowing away any chance of intimacy, by means of violently letting out of the petty daily nastiness, of the grudges, of the late paybacks and of the cureless obsessions. Any occasion is just about good enough to fly into a rage. As the saying goes: let the dead bury the dead. In this choral-like film, magisterially directed by CristiPuiuand set in motion intelligently and passionately by all the actors, the smart conversations led by the young cultivated people of the many members of the clan about the political events and about the recent or past  international seisms (9/11 attacks, the Charlie Hebdo attack) don`t take anywhere either. Intolerance all the way, each of them defends his/her greatness, knowledge, except for the elder brother, Lary, who is a doctor; he recently came from abroad, he is the observer, he is often ironic and sometimes he is confused in front of a show where the piousness is devoured by insignificant things. Many times, the camera catches him away from the others, somehow forgotten in a neutral, passing space, like the hallway, as if there was no room for him anymore over there, where everything is boiling up and vibrates by the studied game of the doors that keep opening and closing. The camera (BarbuBălășoiu) restlessly and sometimes dizzily goes from one to another, searching all the time. No door is left ajar without a reason, we get a glimpse of a face, we get to hear a line. Puiu professes a kind of an intensive culture of the space. Watching the film the second time I resisted the temptation of comparing Puiu`sfilm to a masterpiece, the animation Tango (Oscar 1982) made by 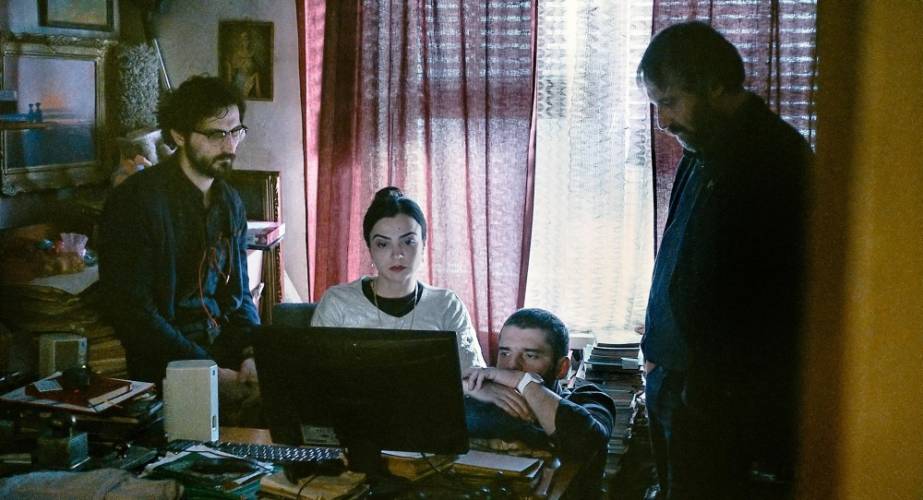 the Polish filmmaker ZbigniewRybczynski; its plenty of characters keep scissoring the screen with all the entering and going out. The feeling is that of a prisoner in a penitentiary, where the doors could promise an elusory freedom from claustration, in the inherent crowding inside a small apartment of a block offlats from the Ceauşescu`s age. When he eventually feels like crying, the hero will find refuge outside, with all the crazy insecurity of the street. As a prologue of the future saraband, the beginning sequence has nothing of the supposed recollectedness that is required when taking part in a memorial service. Lary`s nagging, bad tempered wife (Cătălina Moga) keeps chewing at him for a futile, slightly ill-bred reason: the Snow White that he bought for their daughter is not ok, because it might not be as nice as other ones of her colleagues and that may lead to a terrible scandal. Here, like in so many other moments, Cristi Puiu decorticates, with unique, slick  headstrongness, the very core of the human mediocrity, stupidity and indifference. It`s quite obvious that she couldn`t care less about her father-in-law`s memorial service; all she can think of is an exotic holiday somewhere in Thailand or, more realistically speaking, of going shopping to Carrefour (with
an accent on “a”), until the priest gets home. Once we enter the apartment with the two of them, we get to wonder very quickly: actually who cares about that memorial service? Maybe the widow (Dana Dogaru) who peacefully fixes the handkerchiefs to the ritual candles, but that happens until she also comes down to the mundane things. She can`t help asking Larry, in
a not at all tender voice, the price of the medical bicycle that Larry brought her as a present. Or to bite at a daughter-in-law: “she is just as stupid as her mother.”  She wouldn`t call the Croatian friend of one of her granddaughters other names but “crackhead”. Every person – who assumably joins the lunch – won`t stop talking about what`s on his/her mind. A brother (Bogda
nDumitrache) has a theory on fearfulness…he who is a professional military man. The unwanted brother-in-law Toni (SorinMedeleni) claims his right of not being marginalized by his wife`s family, but he humbly accepts to sit on a small chair. 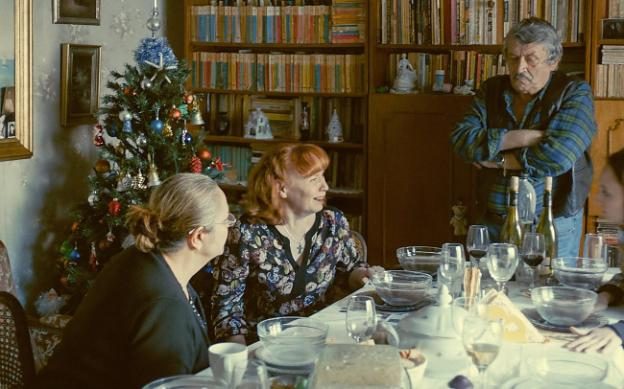 In film he complains, but with one exception, of devout matters, such as the memory of the deceased man. As they say, the women cry easily. No matter how much a young woman might keep herself busy, she can`t stop the teary flow from her eyes, out of too much political excitement – she is mad at the communist old lady (Tatiana Iekel) who is so proud of her fox fur hat and of her conviction about the justness of a regime “that gave everyone a place to stay, schools, etc.” Apparently fragilized by age, the woman proves to be a headstrong person, well trained as an activist, she always has something to say against any argument. But the champion of the teary sighs is Ofelia (Ana Ciontea), the sister of the dead man`s wife. She whimpers most of the time and for many sequences of the film, we just see her sitting on the bedside, with her back to the others. You might think she`s being shy until she bursts into a rage after her husband unwillingly comes in to take her home. An outpour of insults, of intimate domestic details (all my life he has been reproaching me with not knowing to do a blow job.”), an inventory of the man`s mistresses, with names and places (“that one from Băile Căciulata"), interrupted only by the woman`s explosion, on whose ingenuity you could have easily bet. But as it was mentioned earlier, there are a few tears born out of an authentic sadness, of the big brother Lary. He had kept them aside from the disarticulate agitatio 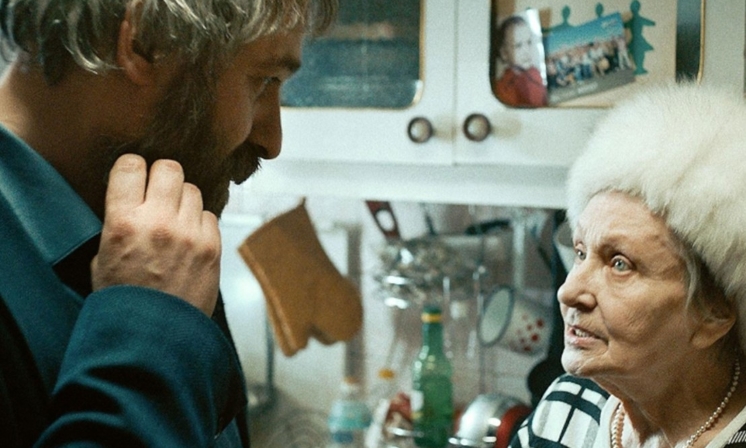 n, from the “grinding” of the words inside the apartment. Maybe the people who are there didn`t even deserve the sincerity moment of a son who remembers an unusual story from his childhood, with the youngest boy and their father. During all this time, the ceremony of the memorial service continues with strains, even after the late arrival of the priest. A few times the signal for laying the table is announced (“I offer you dinner” actually says the clan`s mother), the people grunts for feeling hungry, but another obstacle comes along: the suit of clothes that was bought in order to be worn by a younger man, according to a local tradition, proves to be a few numbers too large. A few stitches save the situation, but after waiting for so long, the entire ritual directed by the widow seems a ridiculous improvisation. The boy clumsily says, as a benevolent ghost of the dead man, “Nice to see you” and the people who are present hum a “Welcome!”. There 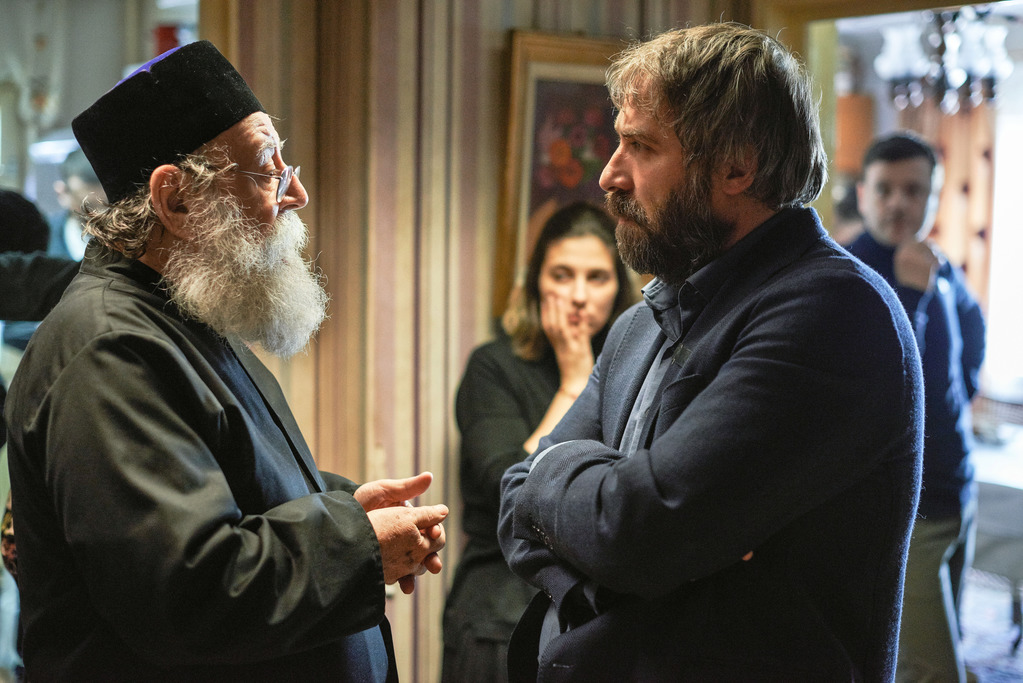 `s no solemnity, no quiver, just a tiny smile on Lary`s face and a kind of general embarrassment. Until the end, the family will not get to sit together around the same table that hadbeen appealed to for so long during the film (“soon, we`ll sit and eat”, “the appetizers are on the table”, “aren`t we going to eat? I`m hungry.”…”are the meat balls rolled in cabbage ready?” A humanity that had been so talkative – even the priest when he is about to live, stays a bit longer in order to say another story right next to the elevator – became tired, of the memorial service and of talking too mush. It`s like the merciless sentence from Pintili
e`s film,Why Are the Bells Ringing, Mitică? - “Let them die stupid!”, even if Cristi Puiu`s cynicism is not that strong. At least the brothers can linger more around the table.  Finally, they receive the longed for meat balls wrapped in cabbage, which are honoured with a good portion of redeeming laughter. At least in this stage of his creation, well settled in that taken over area of realism, the filmmaker – far from going around in circles –digs even deeper. Somewhere, at an end called Sieranevada -there`s a fascinating show of the life that is slipping through the fingers, minced, shredded by our incapacity as people, to comprehend its meanings, beyond the mundane episodes.