ARTE@MNAR and special sections at FFE 2017


The European Film Festival opens this year at the National Arts Museum, where a part of the special section made in partnership with ARTE TV Channel will be hosted. 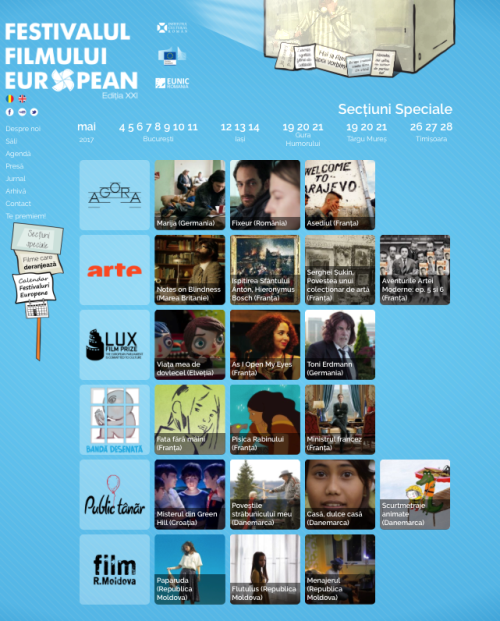 On 5-6 May, through the special programme dedicate to arts (ARTE@MNAR), the audience will have the opportunity to take part to a journey into the modern art history, into Serghei Ivanovici Șukin's private collection and will discover the details of Hieronymus Bosch's work through VR technology.
The special section ARTE will be partially available also at the Czech Centre, where the screening of the film Notes on Blindness (2016) will be held, including a VR component as well. The film is based on John M. Hull's diary and deals with the sensorial and psychological experience of the gradual loss of sight. Cervantes Institute will screen La permanence / On Call (2016, directed by Alice Diop), about humanity found again in a medical office, where migrants receive free medical care, and, in the same time, being a critical statement against the society emanating only prosperity, considering the leadership as a personal problem. Asediul / The Siege (2016, directed by Rémy Ourdan) tells the universal story of the civilisation dealing with a terrible challenge to its existence and fighting for survival. The third feature is Hitchcock/Truffaut (2015, directed by Kent Jones), capturing a famous dialogue between the two legendary personalities.
The other five special sections of FFE are as follows: Agora, LUX, Comic Strip, Young Audience, Republic of Moldova. Agora is a debate platform designed to entice dialogue on themes the society is concerned with, having as starting point three films present in the festival: The Siege (2016), Marija (2016) and Fixeur (2016). Within LUX, the audience will be presented with the finalist films at the latest edition of the LUX Awards (My Life as a Courgette, Toni Erdmann and A peine j’ouvre les yeux/As I Open My Eyes), and on 8 May, FFE proposes a night of films inspired by comic boks (Fata fără mâini/The Girl Without Hands, Ministrul francez/The French Minister, Pisica rabinului/The Rabbi's Cat and Aya din orașul Yop/Aya of Yop City).
The European Film Festival will unfold in Bucharest (4 – 11 May), Iași (12 – 14 May), Tîrgu Mureș (19 -21 May), Gura Humorului (19 – 21 May) and Timișoara (26 – 28 May).
Details at: www.ffe.ro