The Opera superstar Angela Gheorghiu, one of the most famous sopranos of our times, will be a guest of honor of the 17th edition of the Transilvania International Film Festival.
On Friday, June 1, 2018, from 19:00, the Romanian National Opera in Cluj-Napoca will host a special event: an aria recital in which Angela Gheorghiu will be accompanied by pianist Alexandru Petrovici, followed by the screening of 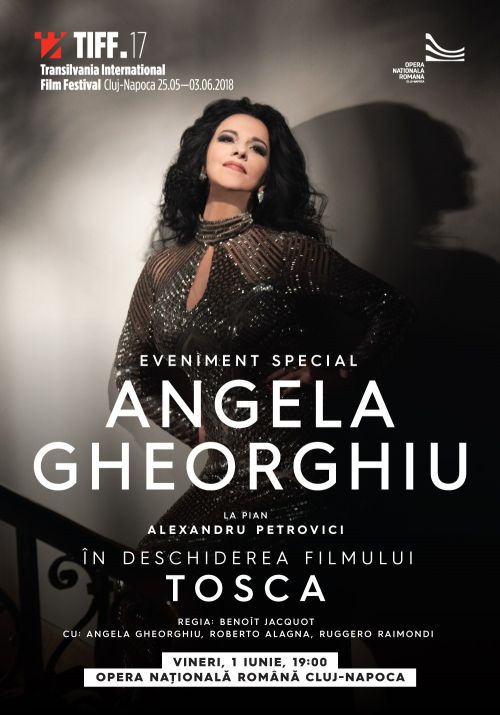 Benoît Jacquot`s Tosca, in which the soprano stars in the main role.
Angela Gheorghiu is a rare phenomenon in opera history: an artist with exceptional vocal technique doubled by profound dramatic and musical intelligence, she`s a magnetic communicator who reaches into the hearts and minds of an unusually broad spectrum of audiences.
Angela Gheorghiu made her name on the world stage with her 1992 debut in the Royal Opera House production of La Bohème. The same year she made her debut at the Metropolitan Opera in New York and at the Vienna State Opera. Her presence and voice have mesmerized opera lovers in the most important houses in the world. Her impressive career also brought her to record with the most important labels and to receive numerous honors, including La Médaille Vermeille de la Ville de Paris, the degrees of Officer and Knight of the Order of Arts and Letters awarded by the French Government, the “Nihil Sine Deo” royal distinction granted by King Michael I of Romania, the European Cultural Award for Music and the Victoire d`Honneur award.
In 2000, director Benoît Jacquot invited Gheoghiu to play the main role in a film version of Puccini’s Tosca. Jacquot wanted her in the film despite the fact that she had never played the role before—simply because he thought Gheorghiu possesses the ultimate diva spirit needed to bring the character to life.        The film also features the great tenor Roberto Alagna and legendary baritone Ruggero Raimondi.  The film reinvents our experience of opera, and it was launched in cinemas around the world after an excellent press reception at its Venice Festival premiere.
On Saturday, June 2, from 19:00 the opera buffs will have a chance to see Gheorghiu once more at the Students’ Culture House, as she accepted the organizers’ invitation to introduce the special screening of Tom Volf’s Maria by Callas. The screening will be preceded by a clip which creates a dream duet between Angela Gheorghiu and Maria Callas, who sing the Habanera from Bizet’s Carmen. in a bonus track for Gheorghiu’s 2011 album Homage to Maria Callas.
Details: www.tiff.ro
(24.05.2018)